Known as “the silent service,” U.S. Navy submarines operate virtually undetected but play a critical role in defending our nation from adversaries on and below the water, and by serving as a strategic deterrent as part of the nuclear triad. With a legacy stretching back decades, we are proud to support the Navy’s mission by providing key capabilities and technologies to its fleet of submarines. Going Ballistic Since the inception of the Navy’s Special Projects Office and the subsequent firing of the first Polaris A-1 missile from the USS George Washington (SSBN-598) in 1960, BAE Systems has provided systems engineering and sustainment support for submarine-launched ballistic missiles (SLBM). Today, we support the Navy’s Strategic Systems Programs office, which oversees the Strategic Weapons System and Attack Weapons System on board current U.S. Ohio-class submarines. We are also helping with planning for the integration of the Trident II D5 SLBM into the Columbia-class submarines — slated to replace the current Ohio-class fleet — by leading weapon system interface coordination and configuration management, as well as system-level requirements management and integration testing. Through ongoing modernization and life extension programs, we work closely with the Navy to maintain nuclear weapon safety and weapon system performance. This work is led by our team based in Rockville, Maryland. At Naval Submarine Base Kings Bay in Georgia — “the East Coast home to the Ohio-class submarines” — we lead logistics data system analysis, support facilities acquisition, and supply system operations. We also operate the Strategic Weapon System Supply Warehouse, and our engineering support teams develop and maintain the technical documentation used by the fleet to conduct SLBM system-level testing, maintenance, and fault isolation. Ready to Rumble The Navy is “where it counts, when it counts” to protect our country and our allies. We assist the Naval Undersea Warfare Center to maintain the operational readiness of submarine torpedoes and other weapon systems. For example, we design, test, fabricate and restore integrated logistics support and configuration management for the production of towed underwater systems and components. We operate various land-based test facilities and special purpose test stations, and we install array handling system upgrades on ships and submarines. We perform all general towed array handling equipment facility operations and fabricate, repair, and test failure analysis handling systems and units. We also maintain repairable units, cables and transducers, towed arrays, towed array handling systems, and all interfacing systems. Top of the (Virginia) Class We are a key provider of propulsor systems for the Virginia-class (SSN 774) attack submarines and the payload module tubes for the Block V SSN 774s. The Virginia Payload Module contains four large-diameter payload tubes, each capable of storing and launching up to seven Tomahawk cruise missiles. “The new Virginia Payload Module will bring an additional 28 missiles to each Block V Virginia-class submarine, tripling their payload strike capacity,” said Joe Senftle, vice president and general manager of Weapon Systems. “Increasing the firepower of the Virginia class is a cost-effective way for the Navy to maintain its strike capability after its four SSGN guided-missile submarines retire.” In fact, we have a long history of supporting the U.S. undersea fleet as the leading provider of propulsors and other submarine systems. In early 2016, for instance, we were selected to provide propulsors, spare hardware, and tail cones for the Block IV version of the Virginia-class subs. This work is performed primarily at our facility in Louisville, Kentucky. 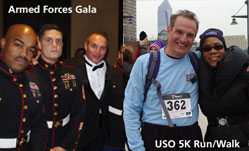 Cory Millar did not serve in the military, but he feels close kinship with the Air Force through his father, a World War II pilot. 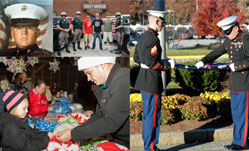 Marine Corps veteran Richard Gagnon, who works in the Warrior Integration Program in New Hampshire, finds a lot of ways to remember and serve fellow veterans by volunteering and giving financially.